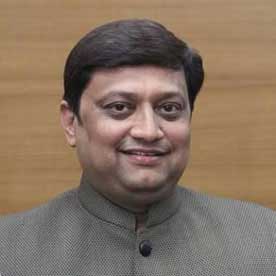 Prof Pandya is the Member of the Medical Advisory Council of the National Medical Commission. He is the Chief Mentor of Government of Gujarat's flagship startup incubator - i-Hub. He is credited to have undertaken a massive transformation of Gujarat University, through creation of new institutions and ushering in modernisation of the academic, research and infrastructure verticals of the University. The University under his leadership has reached, and then retained, the #1 spot in Gujarat across various institutional rankings such as NIRF and GSIRF.

Under Prof Pandya's leadership, Gujarat University won the National Award for NSS at the hands of the Hon'ble President of India.

Prof Pandya has been instrumental in development and the ongoing implementation of the New Education Policy 2020. An avid academician and researcher throughout his professional career spanning over 25 years, Prof Pandya has been a research guide to over 250 MSc researchers, 40 MPhil researchers and 25 PhD Research Scholars. He has published over 150 Research papers, and written 11 books on varied subjects.

At an individual capacity, Prof Pandya secured and spearheaded several important industrial research projects with agencies such as the Ministry of Earth Sciences, Government of India; Indian Space Research Organisation (ISRO) and Department of Science and Technology, Government of India.

A Botanist by education, Prof Pandya serves as a Professor of Department of Botany at Gujarat University. He is also credited to have established the Department of Biochemistry and Forensic Science at GU, where he served as Professor & Head until his appointment as Vice-Chancellor. Prof Pandya believes that benefits and progress of students should be central to the vision and administration of an educational system.